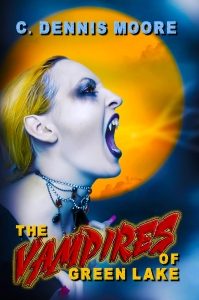 THE VAMPIRES OF GREEN LAKE (The Monsters of Green Lake, book 2), by C. Dennis Moore

The werewolves were dead and David Reed just wanted life for his family to return to NORMAL. But a mysterious wooden box found in the woods suggests that word has a whole new meaning, one he’s not prepared for. As he tries to uncover the secrets of the box, a new threat emerges from the night, and it’s targeting those closest to him. David has to unlock the mystery of the box in order to uncover the face in the darkness and the source of those horrible sounds coming from down the hall. What will he do when the vampires come calling on Green Lake?